Descendant Of The Sun Review 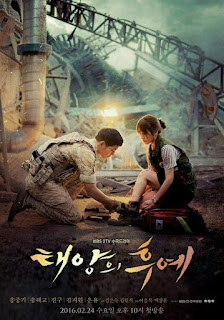 Yoo Si Jin (Song Joong Ki) is the captain of a South Korean Special Force unit. He catches a motorcycle thief Kim Gi Beom (Kim Min Seok) with Sergeant Major Seo Dae Young (Jin Goo). The thief is injured during his capture and is sent to the hospital. Dae Young realizes his cellphone was stolen by the thief and goes to the hospital along with Si Jin to retrieve his cellphone. In the emergency room, Si Jin meets Dr. Kang Mo Yeon (Song Hye Kyo) for the first time. He falls in love with her immediately. Mo Yeon mistakenly assumes Si Jin is part of the thief's criminal gang due to his nickname "Big Boss", which is actually his callsign. He proves to her that he is a soldier with the help of army doctor Yoon Myeong Joo (Kim Ji-won).

It’s been nearly three weeks since the finale of Descendants of the Sun, one of the reasons I enjoyed it, among the various lures, was the visual glory of the cast and location shoots. Descendants of the Sun might not be the best or most romantic or most exciting drama ever made, but it touches upon subjects that most asian dramas don't touch upon, and I really loved that. People who say this drama has no story, are obviously missing the point. Just because it doesn't deal with evil in-laws, revenge plots, star-crossed lovers, amnesia, or noble sacrifice, doesn't mean there is no story. The lovely supporting cast, the amazing chemistry between the four leads, the suspense and tragic disasters, the heartbreak and comedic moments, that even though you just shed a river of tears will still make you laugh. And, lastly, can I just say, the adorableness that is Song Joong Ki!!!!  I've loved him ever since Sungkyunkwan Scandal, and I am SO HAPPY he got this role! I whole-heartedly recommend this drama, and I assure you, if you appreciate the little and sincere moments and thoughts brought onto screen, you will love this.