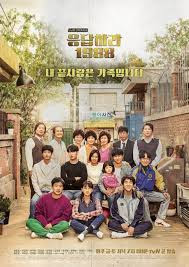 The drama centers on the families of these 18-year-olds, as well as the friends themselves. Dong Ryong (Lee Dong Hwi) is the neighborhood "counselor," living in the house across the street. He showers the group with shrimp chips when the bag pops during a movie. Jung Hwan (Ryu Jun Yeol), this boy lives upstairs our heroine Deok Seon (Lee Hyeri), she calls him "Dog," and explains "he's not exactly a human yet”. Deok Seon is direct and extreme, in the only way a teen can be with her feelings and thoughts. Taek (Park Bo Gum) is a genius Baduk player but an idiot, when it comes to anything else. Sun Woo (Go Kyung Pyo) is the most normal person of the group. He's not only normal, he's the prototypical good son, the guy who looks after his little sister and mother.

I’m pretty sure I’m in the same boat as everyone else who watched Reply 1988. The boat floating on desperate feelings over why this drama didn’t have 20 more episodes! I seriously am in love with this serie, I even thought of it as a first placer in all the Reply series, with 1997 as a 2nd and 1994 for 3rd. I’m still hungover from this series, so don’t take that seriously. What I like about this drama, were the 200% realness. The raw emotions portrayed by each character, and how it’s not always by mere “fate” and circumstances most dramas show these days. All the characters were different from one another, and that’s a huge achievement giving how big the cast is. The overall plot were so damn (sorry) good! The Reply series is always touching and relatable, but 1988 just killed it with the dynamics between characters. I won’t go into details about the actors and characters, beause I’m pretty sure im gonna spill the beans soon, so I’ll stop here. No, just one more thing, I don’t think they could have casted better actors and actresses than what they did. Bravo! Even though it ended in 2016, I’m gonna put this into my favorite dramas of 2015! I’m looking forward to a Reply 19XX.