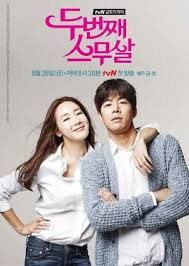 36-year-old Ha No Ra dreamt of becoming a dancer in her high school years, but met her husband Kim Woo Chul when she was 19. After having a child, she focused on taking care of her family and had to give up her dreams. In hopes of becoming a proud wife and mother to her college professor husband and her son Min Soo, she strives to enter college and ends up getting accepted into the same college as her son.

A cute heartwarming story delivered with an encouraging performance by TvN. I really love that channels drama, they are so cheering and not so dramatic and complicated like those typical Korean melodrama. This drama almost made me study for my exams instead of watching it, almost. It teaches the young people that you don’t have to have your whole life figured out now, take it step by step and make sure you’re happy too. The concept really reminds me of Angry Mom, the only difference is that this is in college instead and not high school. I really enjoyed the drama, it was not complicated at all, what I liked was that there were no evil/bad people or good people. They all acted according to their surroundings and very realistically, humanly. The acting was also very good, even the college students were adorable. If I had to point out something negative it would be how weak the main character were, I don’t know why, but weak female MAIN characters bugs me. Like when they can’t do anything themselves and need help with everything. Although Choi Ji Woo (Ha No Ra) had a good performance and her character grew stronger in the end, but she was still dependent on others. All in all a good drama to watch with a nice flow.