I Remember You Review 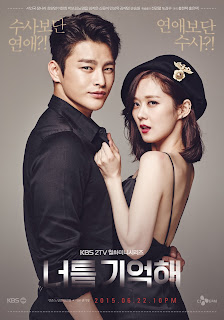 A criminal profiler, Lee Hyun (Seo In Guk) who previously work as a consultant at the police department in New York and had given a lot of lectures in Seoul University has received a mysterious mail about his past. Drawn by this mail he returns to south Korea, and gets to work with a special criminal investigation team. Due to his special insight, he can analyze the crime scene and the suspect at one glance. He works together with an elite detective, Cha Ji An (Jang Na Ra) to solve one murder case after the other. Cha Ji An already knew about Lee Hyun since she has been stalking him every time he was in Seoul. Together they unknowingly unlock the mysteries of the past.

The plot make it sound like this drama is going to be a romance drama, I thought it would be like that. Sorry if it’s misleading, but the drama really do start like that, but the more you watch, the more you realize this drama is not focusing on the main couple but rather the main siblings! I really did enjoy the two brothers hate and affection for each other. I don’t know why, but I preferred that over the main couples relationship. The drama is filled with gominams (flower boys)! It was thrilling and pleasant for the eyes at the same time. I can’t believe I wasn’t going to watch this drama, but an interview with Seo In Guk made me want to watch it. Oh boy, this is definitely one of my favorite drama of the summer, maybe the best actually. The mystery caught me from the beginning with all the psycho profiling talk and it made me really interested in profiling. It’s not like CSI or anything, it got its own flavor in this drama, hmm.. maybe that’s why I fell for it from the beginning. The story is filled with thrilling murder cases (one more plus), but because it had a 15 age restriction you don’t get to see any hardcore murder scenes, but somehow they made it creepy anyway. That must have been a hard job for the production crew and writers, but they managed it with awesome results. All of the actors were brilliant, I can’t pinpoint just one, that would not be fair to the rest, they were all amazing with their respective characters. I really don’t know what more to say to make you watch it :b

After spending a lot of time trying to start, which by the way has a both confusing and quite dull introduction, I managed to start this drama and to my surprise I finished it in matter of 2 days. As profiling/psychological/crime dramas go, this one was quite close to what I expect from a complicated yet interesting plot. As a Korean drama I have to admit it was a bit darker than usual, but still managed to add the ‘typical flavor’ of both overdramatizing and over sentimentalizing both the sob story and the ‘bromance’, as all of us Asian drama lovers adore. To be fair I get all characters – which I very important for me when I am watching a drama – but I felt as if they were too much of stereotypes. It’s not as if it ruins everything, it is just too typical. And I have to say that the romance was weird – not bad – just felt out of place. A lot of you will probably disagree, as it is a typical Korean drama move (the entire know each other from childhood blah blah… and the second lead trying to ruin all), but I was just annoyed most of the time.
On the other hand, this has to be hands down the most decent portrayal of a female cop. So far most female cops in drama are damsel in destress and THANK GOD Korea has understood the meaning of COPS... Like don’t they do training or anything like that... seriously… But this drama showed what I was waiting for, and even if the female would be kidnapped or whatever, she’d kick ass… Though most of the time she’d still be saved by a male, I think that Jang Na Ra was the one fighting the most in this drama... Which is cool. Seo In Guk was cool as always, and those tight fitted suits really suit him!
Okay so all in all, a quite interesting drama, but a bit too typical for my taste – though I liked the darker elements.