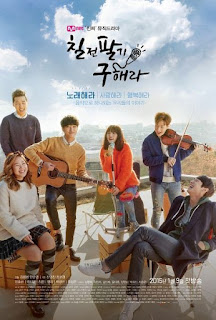 The female main character, Go Hae Ra (Min Hyo Rin), who is always unlucky with whatever she does decides to be a songwriter like her dad to make her deceased father known to the world. Her father died of a heartattack on her birthday, and that leaves her mum and her alone. Because of some financial trouble, her mum decides to seek out her old best friend, who is also a single mother with two boys. Kang Se Jong (Kwak Shi Yang), who is a genius student at KAIST, and his fraternal twin, Kang Se Chan (Jin Young), these three kids grow up to be best friends. They experience failure and breakdown after they participated in an audition as a team, which they finally overcome. The drama unfolds a complex but romantic love story amongst the three characters.

After watching the first two episodes you get the feeling that you just found the perfect drama. The story unfolds and you get excited about what is going to happen. But oh boy! What a huge disappointment this drama is, the next ten episodes it’s just going down and down. This is a typical teenage musical about young people trying to succeed on the big stage. Every character has their own problem to overcome and despite the differences, friendship grows. Its been a long time since I last completed a drama that I found so dreadful in terms of writing/acting. I think the short episode count is probably to blame. I thought it’s only 12 episodes and kept on hoping it would get better, but on the 11th episodes it just didn't. Total waste of time. Throughout the drama you get the feeling that it was a low budget drama, and the actors were all B-rated, of course they had their charms but it was just not a convincing character. Especially Min Hyo Rin, I was disappointed in her the most, she had such a poor acting ability she pissed me off 90% of the time. Anyway, I won’t end it with just criticism, so I’m just going to say that the “music videos” in the drama was excellently done, and they made me want to rewatch some of them again after the drama.