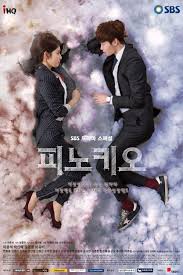 A young group of people in their 20’s is working hard to become reporters at prestige’s TV-stations, as they report they cry and get hurt by the truth and realize that as reporters they must only tell the truth.
Ki Ha Myung (Lee Jong Suk) learned this at a very young age, where his father, a very respectable rescuer, was overnight framed by the news, and depicted him as coward, which resulted in nine other rescuers death. This lie destroyed his family, his mother committed suicide with Ha Myung, but he survived and was rescued by an old man, he took him in as his son and changed his identity to Choi Dal Po, and there he stayed at an island where he wouldn’t listen to the news. One day the old man’s newly divorced other son and his daughter moves in with them. However, that accident led to Ha Myung growing up with hatred for reporters especially reporter Cha Ok (Kang Shin).

Oh god, I can’t write that plot better unless I’m going to spoil something, and that i reeeeally shouldn’t do, since this is a drama I’m sure you would love because of all its surprisingly plot twists.
Though her character didn’t get nearly as much development as the hero did, Park Shin-hye’s performance was the one that stood out in this drama, that was a BIG surprise for me since I’m not a big fan of hers (actually I have too much against her), but she really convinced me of her acting abilities. She does funny in an effortless way, and made In-ha so lovable that I forgot all about the sad girl who used to get dragged around by rich assholes (man, what I wouldn’t give to wipe Heirs from my memory). It’s so nice to have her playing a strong female character, and so charmingly at that. I have to mention the chemistry too, wow.. they left me breathless accountable times, not fair seriously, not fair!  All the actors did a great job depicting their characters, from the broadcast station to the family, everyone made you love them (and hate them), and they liteally dragged you into their world. Somehow I had to bid the drama farewell, 20 episodes was too short, before I knew it I was done, it was only after the aftereffects of the drama I realized I got to send the show off with a feeling of satisfaction and lots of warm fuzzies to spare. Isn’t that what a great drama is supposed to?  Thanks for the feel-good times, Pinocchio. You were the best love story between an uncle, a niece, a grandpa, and a dad ever. Strangely, not as weird as it sounds! 2015 is off to a good start, keep them coming!