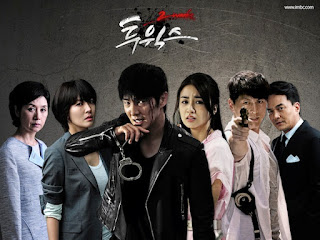 Living as low paid gangster Jang Tae San (Lee Jun Ki) had given up on life, considering himself as “trash”. Having gone to prison two times for his boss, Tae San was allowed to do whatever he wants to do - and that is basically living from one day to another. One day his ex-girlfriend Seo In Hye (Park Ha Sun) shows up in front of him asking him to be a donor to her daughter. At first Tae San is shocked she would ask him, but then she tell him that the daughter was born 8 years ago, when the two were dating. Now Tae San has a daughter, and she wants him to help her. At first he doesn’t like the idea of him being a father, until he meets her, and falls for her.
At the very moment while finding out that he is a match for the bone marrow transplant; a girl gives Tae San a camera, which Tae San by accident just puts in his pocket. He then leaves to find out that the date is set two weeks from that day on, so he cannot get any blood infection as it might hurt the possibility to transplant. But when his boss murders the girl that had given Tae San the camera, he decides to frame  Tae San for it, and letting him take the fall like he used to.
When Tae San is found at the crime scene with his fingerprints on the murder weapon, he is arrested and almost killed behind bars. So Tae San decides to become a fugitive in order to stay alive till his daughter’s surgery and at the same time clear his name…

After reading the summary I thought it was like the Japanese drama Runaway, so I was not very keen on watching it. But the drama is quite good, and I really like Lee Jun Ki, especially having him as a dad, and the female actress Park Ha Sun was amazing, incredible acting.
The story is very action packed and makes sense throughout the storyline. Even if it becomes a bit draggy in the long run, it is better than most dramas of the same genre and type - pretty great. I really don’t understand why it wasn’t more popular, but also I didn’t like the ending - the annoying idea of a happy ending, but I guess that’s what Koreans see as a happy ending.
Okay, so do I recommend it? Yes, it is fitting everyone.

Kamji's Verdict
I started watching this drama, when half of it already aired, I really wasn’t expecting anything from it so I thought why not just start it. To understand this you have to know that I would rather not start an ongoing drama than not watching it at all, haha that sounded complicated. Nevertheless, I started this, and phew what a roller coaster of emotion I got there… I really loved this drama, everything about it was great, somehow I got blinded by it so I wouldn’t see any fault in it, therefor I have nothing bad to say, only that this is a recommendable drama, and it would be really stupid to leave this out of your to-watch list (if you haven’t already watched it). Honestly, I loved this drama because it showed exceptional character development that I have never seen in any other drama. Action packed from start to finish!! And the love story, so real, so awkward, so painful, but for me the real love story was between the father and the daughter, and that worked out just fine for me. Kurigu.. Can I say how happy I was to see Song Jae Rim as an assassin? I was very pleased ;)