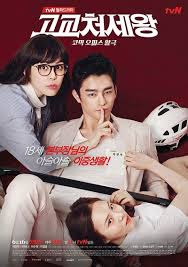 Lee Min-seok (Seo In Guk), is a popular high school student and varsity ice hockey player. He and his older brother Hyung-Seok (Seo In Guk) look very much alike, despite their nine-year age gap. One day he gets a mysterious phone call from Hyung-Seok telling him to impersonate his brother as the new director at an IT conglomerate. Now he has to live a double life while unaware with the rules there is within the Korean workplace. With only the help from his two best friend, he has to graduate high school, while keeping up with ice hockey and be a successful and intelligent director, until his brother comes back.

I am a big fan of Seo in guk since before Reply 1997, so I really looked forward to this drama, and he didn’t disappoint me! He is slowly rising to be a top actor, and I can’t wait for his next project. But the drama as a whole was interesting although I didn’t end up enjoying it. I liked the plot a lot, but the way it turned out to be, sucked a little bit for me, I guess I am too tired of noona-relationships, and this one was a little stupid. Like c’mon, he is a high school student.. It’s just not right. If you can look through that, you get a hilarious drama, with a lot of charisma (Lee Soo Hyuk) kekeke, so all in all an okay watch.