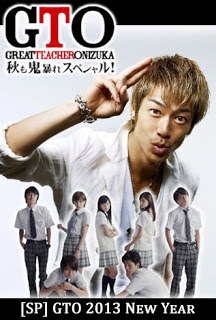 It’s Chritsmas and Onizuka (AKIRA) and his class are having fun as always.
As time passes Saejima (Yamamoto Yusuke) is feeling down since he hasn’t got any girlfriend, but everything changes when he meets a damsel in distress. Naïve as he is, he falls for her and asks her to marry him, which she surprisingly agrees to do. But little does he know, she has small triplets whom she dumps on Saejima, and leaves to find the father of the three.
At the same time on of Onizukas students is having an issue at home ever since her father decided to re-marry. And due to Saejima’s issue, Onizuka hasn’t been able to really talk to her, which ends up her talking to another teacher about the issue. But somehow she ends up in something way bigger then she had expected. How will Onizuka deal with these issues? And how will he save Saejima?

Lol, I was really missing this guy and his class. This special is funny, crazy, ridiculous and touching all at the same time, completely like another GTO episode. I really love that his two friends also are involved in the class as much as he is, and that they are all together in everything.
As a New Year special I think the theme is good and most of it is really enjoyable. Though somehow kind of silly, it really does its job and delivers for all GTO fans everything they want.