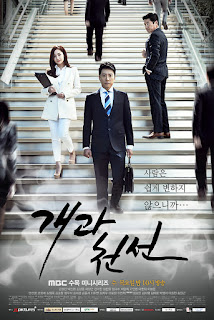 Kim Seok Joo (Kim Myung Min) is a cold, ruthless and cruel lawyer that is merely concerned with cases as long as they give him any kind of profit. If the evidence is against his client he’ll buy the witness’ out or he’ll make new solid evidence. At his law firm, every single lawyer thinks and acts the same: the more ruthless the better, except for the new intern, Lee Ji Yoon (Park Min Young), who Seok Joo had met some time before and ended up having a one-night stand with. She is filled with ambition, talent and justice, but is a blabbermouth. The two butt heads, and when Seok Joo gets into and accident and loses his memory; Lee Ji Yoon tries to help him. However the amnesiac seem different somehow by going up against his law firm and he happens to have an effect on the people around him…

I don’t really know what I was expecting of this drama, since I only knew Park Min Young, so I kind of still am in a drowse after it. The drama is a good one, but the financial terms and discussions lefts me confused and dazed, since I had zero knowledge about what on earth they were talking about. As a general you could understand most of it, but I have no idea what the climax was about, let alone the ending.
The main actor Kim Myung Min is fairly new to me, I think he was popular in Korea from before. And OMG, his voice: eargasms. 80% of the time he was talking I didn’t look at the subtitles, and made me go back because I missed it. Min Young was as she always is, not a favorite of mine. The drama is kind of a realistic every-day, with a twist of amnesia in the middle.
To sum up: okay drama, for the serious ones.

Kamjis Verdict
Finally finished! A 16 episodes drama have never felt as long as this one. On the other side, I think I can easily become a lawyer in Korea now, the drama was bombed with all those facts and laws and stuff, so those 16 hours were satisfactory used.

The drama itself were okay, not bad as I had a hard time watching it, but not as good as I was looking forward to next episode. Nevertheless, I managed to finish it, and that was a success for me since I had many other dramas I wanted to watch more. I can’t really say more about it without spoiling anything, but one thing I can assure you of, the writers did a good job with all the cases and trials. There were really intimidating and believable, so good job with that.