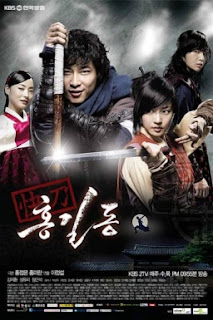 Hong Gil Dong (Kang Ji Hwan) is the bastard son of a high positioned minister, and is infamous for causing trouble at markets and in brothels. This is due to his father telling him that he is worth nothing and that he will never be able to do anything with his life. Heo Yi Nuk (Sung Yu Ri) is medicine merchant from China arriving with her grandfather, in order to make it big. Whilst on the boat she meets Lee Chang Hwi (Jang Geun Suk) who acts mysterious, even threatens her if she bothers him, and with her luck she unwillingly bumps into him every now and then. As soon as Gil Dong finds out about Yi Nuk, he asks her to teach him Chinese to he can take the net ship to China, and get away from Joseon. At first they bump heads, but eventually become very close.
When Gil Dong is accused for theft, which was set up by someone close to him, he tries to find out the real culprit, and ends up being accused for murder. To make things worse when he tried to clear his name, he ends up being accused for treason.  Eventually he finds out that everyone he thought were his friends betray him, so he decides to change his ways by helping the poor against the vicious king and his noblemen…

I don’t know why I suddenly felt like watching a period drama, but I just went with it, and it was okay. I am a fan of the original Hong Gil Dong story, so I was pretty satisfied with the drama, even though they weren’t completely identical. It was a bit sadder than I thought it would be and the love story sort of lost its flavor somewhere along the line. This is also the first time that I watched a coup where the new king was pretty annoying - they usually are better.
I really like Kang Ji Hwan, I don’t know why actually, I think it might be his dedication to the part? And how happy was I when I say Yu Ri in this - me happy! (Little bit of Fin.K.L fan :P)
All in all an okay drama to watch especially if you like the tale.