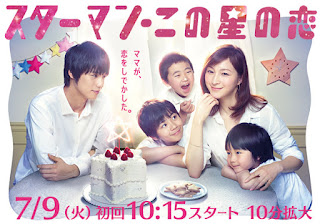 Uno Sawako (Hirosue Ryoko) is a single mother with three boys that has been left by her husband who ran away from her and his family. Sawako lives with her grandmother and the three boys in a small town far away from Tokyo, and greets every day happily even with her luggage.
One morning while driving her youngest to childcare she almost hits a man (Fukushi Sato) swaying along the road, but barely manages to stop. When she walks out to scold the person, he passes out right in front of her. Captivated by his way of looking at her, she takes him home, and she finds out he has lost his memory due to shock.
After pondering she decides together with her best friend Misao (Koike Eiko) and her grandmother, to tell the man that he is her husband. When managing to make her children get on board, he wakes up, and the story of her younger husband ‘Hoshio’ begins…

I was pleasantly surprised, and I was sort of head over heels even though I have no idea why. I mean the story is seriously absurd, from memory loss to aliens, it really has the most bizarre situations, and I say that with having watched all other dramas. The relationship seems shallow when you think about it, but I was kind of liking it. The couple was cute, so where the kids, and the entire family was so adorable.
But I do think the main reason I liked it as much as I did was because I had absolutely no idea what was going to happen next episode. I was taken aback by everything, especially by the pace. It was fast!
So if you want a cute family story with a hint of the weird and the sci-fi, this is a great pick.