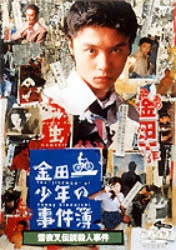 The story continues with Kindaichi Hajime (Domoto Tsuyoshi) and Nanase Miyuki (Tomosaka Rie) and their accidental cases. Always ending up at either deserted situations where murder occurs, witnessing one or being invited to places where a mystery is to be discovered. In order to uphold his grandfather’s reputation, Hajime doesn’t let any case slip unresolved.
In this season the murders get more complicated and Hajime gets suspected more than once for the murders, for trying to figure out the truth…

Again: sorry for the review, but you get the idea. This season is funny and likeable, and also has some more interesting cases compared to season one. The couple is great as well, and makes a really funny combi. Also adding the police officer they make the story really interesting.
If you like “Detective Conan” manga or anime this series is what it reminds you of. A young kid accidently ends up at a place where the murderer is, and he has to solve it as a mystery.