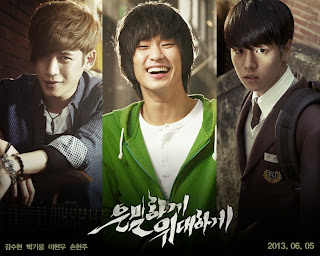 A group of youngsters have been trained by the North Korean elite forces since they were kids, in order to become a secret spies, whom even the people at the top do not know about. Lieutenant Won Ryu Hwan (Kim Soo Hyun), a top agent, is on a mission in South Korea, he disguised himself as the village idiot Bang Dong Gu, and has spent two years, pretending to be a fool, while monitering the situation, though there is not much to monitor. He has amazing fighting skills as well as speaks 5 languages, yet he doesn't get to use them very much. All of this he does only because he believe that his mother is being protected by the government. As two years passes, another member of the secret spy group arrives at the same village, Rhee Hae Rang (Park Ki Woong). Hae Rang disguises himself as a rock star, yet to make his debute, so he goes around auditioning to become a star. As soon as he arrives, Ryu Hwan thinks there is something wrong, why would they send a spy where there is another spy, unless there is something going on. Things get even more fishy when their student/dongsaeng spy Rhee Hae Jin (Lee Hyun Woo) is sent to the village to check upon both of them. What is going on suddenly after no notice for 2 years? Is there a great mission coming, or are they in danger?

This movie starts of with comedy, however! (you know where im going with this) - It certainly changes your mood halfway through. It's very light in the beginning but you end up really wondering about their lives. And yes of course, it's typical since this is a north korea vs south korea movie, and yes north korea is not portrayed very positively. It get's really tough and almost meaningless. You just end up thinking "what the heck!". It is pretty terrible, especially since these "boys" are so young, and yet have these lives. The positive about it, ehmm hello~ pretty handsome boys/young men. What do I say, I loved Park Ki Woong's acting again, brought me back to bridal mask. And Kim Soo Hyun of course, amazing job. I really feel he is getting better and better at acting. This is only my second time seeing Lee Hyun Woo (first time in Equator Man and liked him since that) well I dont know how much I can say, I wasnt super impressed by his acting. The fighting scenes were great EXCEPT for those typical flying jump scenes that ruin the whole thing (for me!) and yeah dont you break your arm if it gets hit by a metal pole!? I guess not if you're Kim Soo Hyun. I recommend it, it's funny most of the time, with a serious note, it shows the lives of young agent.