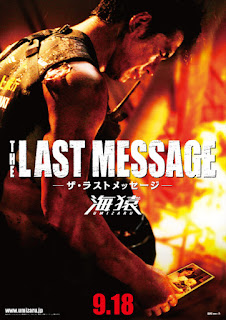 When a huge accident happens on the drilling plant “Regalia”, a ship colliding in the plant, Senzaki Daisuke (Ito Hideaki) and his buddy Yoshioka Tetsuya (Sato Ryuta) are put to the task to escort the engineer Sakuragi Hiroshiichirou (Kato Masaya) in and out. But due to a typhoon approaching, Daisuke becomes separated from Tetsuya, and gets stuck together with Sakuragi and three other people: Nurse Nishizawa Natsu (Fukiishi Kazue), driller Kizima Hisayoneo (Hamada Gaku) and newbie rescue diver Hotori Takuya (Miura Shohei).
As the situation grows more dangerous, the rescue helicopters aren’t able get close, and due to Regalia being a combined plant (different countries contributed in the building of the plant), the government officials are more interested in saving the plant, than the actual people.
Now it’s up to Daisuke to save the people inside, and get back home to his wife and new born son…

I can’t believe that for every movie, it just keeps getting better and the quality too! I mean after the drama I really didn’t believe they would be able to make it deep, since 11 episodes is about 8½ hours, but they managed in the second movie to do just that. I really didn’t expect it to be that exciting, but they really overshined themselves. The storyline is as usually heartfelt, and inspiring, though I’ve started to feel as if I’m basically waiting for Senzaki to die, like really. Every movie is him being in a pinch, I mean how he even survives dammit LOL, not a bad thing though.
This movie you can actually watch without seeing the rest, well you can do that with them all, but this one doesn’t seem to be in the same category somehow: yes, it is in water, but we actually only see them diving in the end. Okay, minor detail, but still.
All in all pretty darn good.