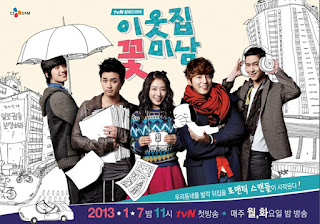 After some traumatic event in her younger days Go Dok Mi (Park Shin Hye) locked herself in her apartment, and only goes out once every other season, becoming a hermit. She has made her apartment her sacred place, where she lives alone, does work as an editor, and prefers not to go outside. Across the building of hers, she occasionally peeps into her neighbor Han Tae Joon’s (Kim Jung San) house whom she has had a crush on for some time. Next door, lives a webtoon artist Oh Jin Rak (Kim Ji Hoon) and his assistant Yoo Dong Hoon (Go Kyung Pyo), who never bothered her, and Jin Rak even helps her with situations she doesn’t want to deal with, and secretly loves her by the sideline.
Everything suddenly changes when a famous young game creator Enrique Geum (Yoon Shi Yoon) comes to Korea to help his childhood friend, who happens to be his first love and his brother Tae Joon get together.
Enrique catches her peeping from her apartment, and runs to confront her, basically forcing her to interact with people, which she fears. Things get more chaotic when Cha Do Hwi (Park Soo Jin), who is part of Dok Mi’s past, arrives to live in the same apartment blocks…

The drama has heart, and depth, but why doesn’t it work for me? Hmm, I honestly didn’t fall for the love triangle, nor did I fall for the lead couple. I thought that everyone did a good job, but I really didn’t feel it. Maybe I am tired of these dramas with storylines that are too typical. And omg, this one I didn’t even understand why the supporting actors where in it. They didn’t even seem worth the screen time. Anyways, yes they are flower boys, yes it is funny, and yes 80% of people watching this will love it. But I just thought it was okay.