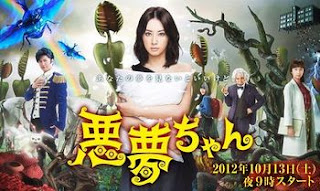 “A person's consciousness is at the tip of an iceberg. Within the soul, there is an infinite unconsciousness that spreads. Inside is where all the emotion, all the behavior and even time sleeps. This little girl's (Koto Yuiko) unconsciousness can connect with other people's unconsciousness. And when she sleeps, her soul awakens. Other people's ominous future becomes her nightmare and materializes in the real world.” (Taken from the drama intro)
Mutoi Ayami (Kitagawa Keiko) is a two faced elementary teacher, who pretends to be nice and kind towards everyone, but in real life doesn’t care about her students nor about her colleagues. Everyone around her sees her as the perfect teacher, except the school nurse Hirashima Kotoha (Yuka) who is jealous of her popularity.
Everything changes when a new transfer student arrives: Koto Yuiko (Kimura Manatsu) is a special girl living with her grandfather. When both grandfather and Yuiko see Ayami they are astonished, but they don’t tell why. Shortly after Yuiko asks Ayami to save an old lady from a fire, which is going to happen soon, since she saw it in a dream. Thinking it was a childish thought Ayami leaves it like that, until a house with an old lady is burned to the ground not far away from the school.
Ayami hurries to Yuikos house, and meets Shiki Takashi (Gackt), who looks exactly like her so-called “dream prince” she dreams about, whenever she sleeps.  Soon she finds out that Yuiko has a special ability and if she doesn’t hurry shell end up killing a student and die herself…

This is one of my fave dramas, like by far. I wasn’t that into it in the beginning since the CG was weird, but as the story does on it becomes really good, and you can’t not like it. Or I couldn’t at least. Keiko is brilliant, and even Gackt had his moments, but the actiong in this drama was okay even though most of them were kids.
This drama happens to be one of the few ones in which I had no clue what was going to happen. I was surprised, confused, intrigued and excited  - all at ones - without it becoming a dark drama.
I really recommend, even if you don’t like fantasy.