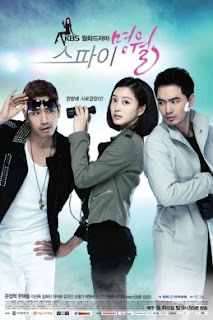 After failing her test to qualify for the Special Operations Unit, North Korean Hallyu Squad Sergeant Han Myung Wol (Han Ye Seul) is asked to go on a special mission that involves taking the daughter of her captain to the Philippines so that she can see her favorite idol, Kang Woo (Eric), perform, which she feels obligated to do. After a great deal of events, Ye Seul screws up an mission for another unit, and is forced to go on leave, but as stubborn as she is she decides to make up for her mistake. She finds out that the idol, Kang Woo, got a scroll of some kind, which was supposed to be in the hands of the North Korean. She decides to go to the South and get it from him. In South Korea she is mistaken for a fan by Kang Woo, as she saves his life; which ultimately is heard by the North, and they decide on her execution. In order to save herself, she tells the messenger that she wants to assassinate Kang Woo in order to save the North from the bad influence the Hallyu wave has. This is misunderstood by the North as: her wanting to get his sign. This creates panic in the captain, who knows it’s his fault, so they decide to give her 3 months to get married to him, and take him to the North…

Okay the review sounds weird, even for me who has watched it, but it can give you an idea somehow right? It’s a push-and-pull drama, but still sweet, and pretty funny.  I love the entanglement, and the mix with the north. I have to admit it is pretty sad, even though it should have been funny? I don’t know, somehow the north ended up being really mean :( Lol, anyhow, besides a couple of bad stunts, it’s really entertaining, and pretty creative honestly; with the entire North Korean spy falling for South Korean Hallyu star, I kind a fell for it hihi. Even though my rating is 3½ stars, I would recommend it, if you don’t have anything else to do.