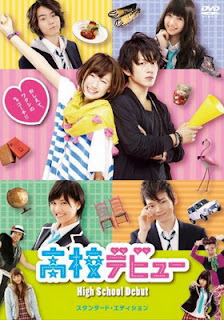 Nagashima Haruna (Ito Ono) devoted all her time for softball in middle school, and decided when she starts in high school she’ll let herself fall in love, or just simply get a boyfriend. But unfortunately, when she begins high school, no one even goes up to her to talk to her. She never paid any attention to fashion trends, and has no idea how to attract boys. When, by sudden encounter, she meets Komiyama Yoh (Junpei Mizobata) who at first glance looks popular, and after he comments her fashion sense, she decides to ask him for help, to dress her up and make her ‘presentable’. He refuses by saying that “girls are troublesome and you can’t trust them”. On the other hand, his beautiful younger sister decides to help, by dressing her up. After watching her softball game, he sees her fighting spirit and decides to help, but under one condition: she cannot fall in love with him!

After reading the manga I had to watch the movie, and eventhough they aren’t really alike I have to admit I enjoyed the movie. It’s not groundbreaking or anything, just a good pass by movie, with cute moments. What surprised me the most was how well the actors fit the characters: never expected Junpei to do a Yoh this well, especially since Yoh somewhat of a badass with style, not really a delinquent kind of badass, but the type that never does anything embarrassing, and no matter what he does its cool. Junpei does it as if it’s made for him! But the hardest character in this movie most definatly is Haruna, because she is all over the place. And Ito does it okay, maybe took it too realistic, the all over the place part, but its decent. Anyhow a fun and cute movie, I sort a liked it : )

Jenji's verdict
Seriously I didnt even like this movie. I would have given up on it if I wasnt too bored to do anything else. I havent read the manga or anything so this is just based on the movie. I think it was ridiculous. And even I.. me! could easily figure out the ending. Then again, it wasnt because the movie is badly made or anything. It was just a bit below average if I might say. Really I didnt like it. It was actually really typical japanese if I may state so. (sorry!, my opinion)  I didnt like the lead actress either, dont know why. The male lead was okay, but and it was all manga-ish, which was probably on purpose since its actually based on a manga. Just not my kind of movie. It could have been made better if it was the purpose..