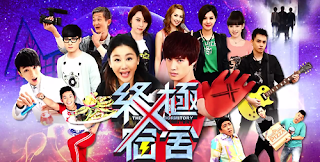 When the war of the dimensions begins Xiong Ges (Pauline Lan) two sons and husband leave to protect the Iron Dimension. Due to the exposure and tightened rules about Yi Neng users, Xiong Ge decides to open a dormitory to pay her bills, and to help children with Yi Neng powers. Helping her is Han (Emily Tsai), who is yearning for Xia Tian, but staying loyal to the family. Ye Sheng (Huang Wei) and Cang Qiong (Lou Hong Zheng) are both children arriving at the dormitory. Though one is a Yi Neng user, and the other is a Ma Gua (not a Yi Neng user). Unfortunately, they can’t distinguish which is which, and they can’t use their powers to find out as they may get exposed.
Everything seems to fall into place, until there suddenly appears a magical door with the number 206, and the door seems unable to be opened…

It’s been quite a while since I’ve seen “The X-Family”, but watching “The X-Dormitory” it all came back to me at once. Unfortunately, this season is not as good as the other one, both because the 4 main actors aren’t in it (the ones that were in X-Family) and because the enormous lack of storyline. They do add a few and try to make it interesting, but since it is the second season, you can’t not compare these two. Another bad thing is the humor: 10 years ago, the slapstick and over reactions might have been funny, but there are just so forced here and not funny at all.
The only light (and interesting part) is SpeXial, and their storylines. Though the unnecessary forced love triangle between Xia Tian, Han and Cang Qiong was horrible, the idea was good, and well executed considering the crappy script and subplot the actors had to work with. The story of Ye Sheng was very enjoyable, and everything involving him (and the other one - no spoiler) was great to watch.
All in all, a bad sequel, though it has great acting prodigies - or just good young idol actors…