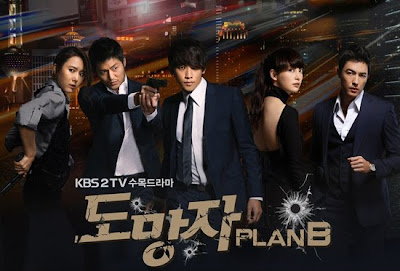 Ji Woo (Rain) works as an PI, personal investigator, people pay him for finding information or solving cases for them. One day a woman named Jini wants him to work for her. She convinces him by saying that she knows something about the murder of his best friend Kevin. Ji Woo accepts and they then start on a case that is much bigger than they had expected. They are trying to find someone or something called Melchidec. They do not know who it is, all they know is that Melchidec is responsible of the murder on Jini's family, her grandparents, parents and adoptive parents. All people around her get killed. The two of them learn to trust each other as everybody around them turn out not to be who they thought. In the meanwhile an officer, Chief Detective Do Soo is after Ji Woo as he thinks that he is the one who killed Kevin but he as well finds out that this is much bigger. It all revolves around some gold which disappeared during the war, it turns out that Jini's grandfather buried the gold and now all these people want to get their hands onto it. It goes so far that even the detective who taught Ji Woo everything goes against him. The gold turns everybody insane. But Ji Woo and Jini must get the gold in order to prove everything or the people will never know the truth.

What i liked about this drama is the comedy. It does not disappear. Though it of course is more serious that at the start it still has a lot of humor which makes it fun to watch and khhhhhrrr when a man knows to smile (*.*) rain really did impress me in this drama, his acting was lovely haha, his character was just so much fun and kiyooo (cute). And the other detectives were reaaaally fun. Like they all speak english japanese chinese and korean and they totally mix. It was fun and serious at the same time with an alright storyline and it didnt get boring (which korean dramas often tend to..) Though there was one actress who was really fake and grhh i coundnt stand watching her. But besides that everything was juuuus great. I definitely recommend this drama if you want something more than just a love story and more action and drama. Though i will hesitate a little giving it 5 stars. but definitely 5 hearts

Bunji's Verdict
Hmm, honestly? It was good, but with a catch: several ‘unbelievable’ scenes. Like, it was too good to be true a lot of the times, but on the other hand, and this may sound weird, the deaths sort of picked up the bad parts. Does that make sense? Lol, even I don’t understand what the hell I’m saying. I mean, several of the fighting scenes were okay, but they sort a ruined it, because of the most silly ‘run away’ scenes. Like, how stupid can cops be? And not to mention the bad guys, gosh. But as I said, the fact that people die made it believable, like if they didn’t, then it would have been absurd. At the ending, I was angry because I felt that there were more ‘good’ guys instead of ‘bad’ guys, but I was positively surprised when I found out every one is corrupt, well almost everyone :P
I loved the characters, but towards the end I noticed that Bi didn’t really fit his character, he was too handsome. But then again, I noticed that it was when he was with the lead actress, which by the way I have to say looks SOOOO OLD! And I didn’t like her that much, as the lead actress.
The ones that made me whine were the cops, or the ‘cop-couple’. I mean can you say ADORABLE? Hah.. Anyhow, good drama, with few flaws : D